'Tears of Paradise' at Edel Assanti

Gordon Cheung’s exhibition 'Tears of Paradise' opened 16 January – 7 March 2020. The show combined a new series of paintings with an ambitious sculptural installation inspired by Chinese window lattice designs that Gordon has been developing for three years. 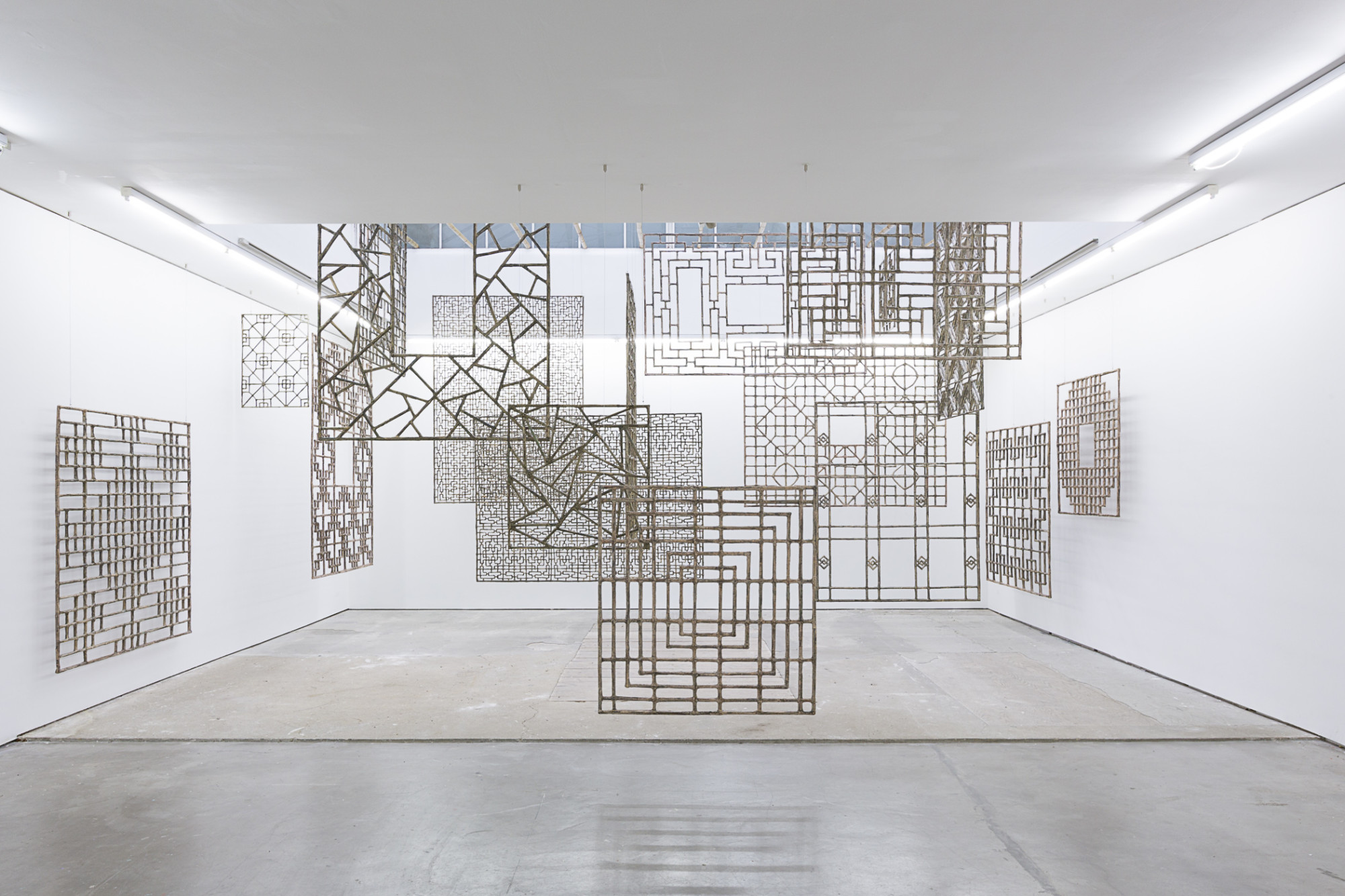 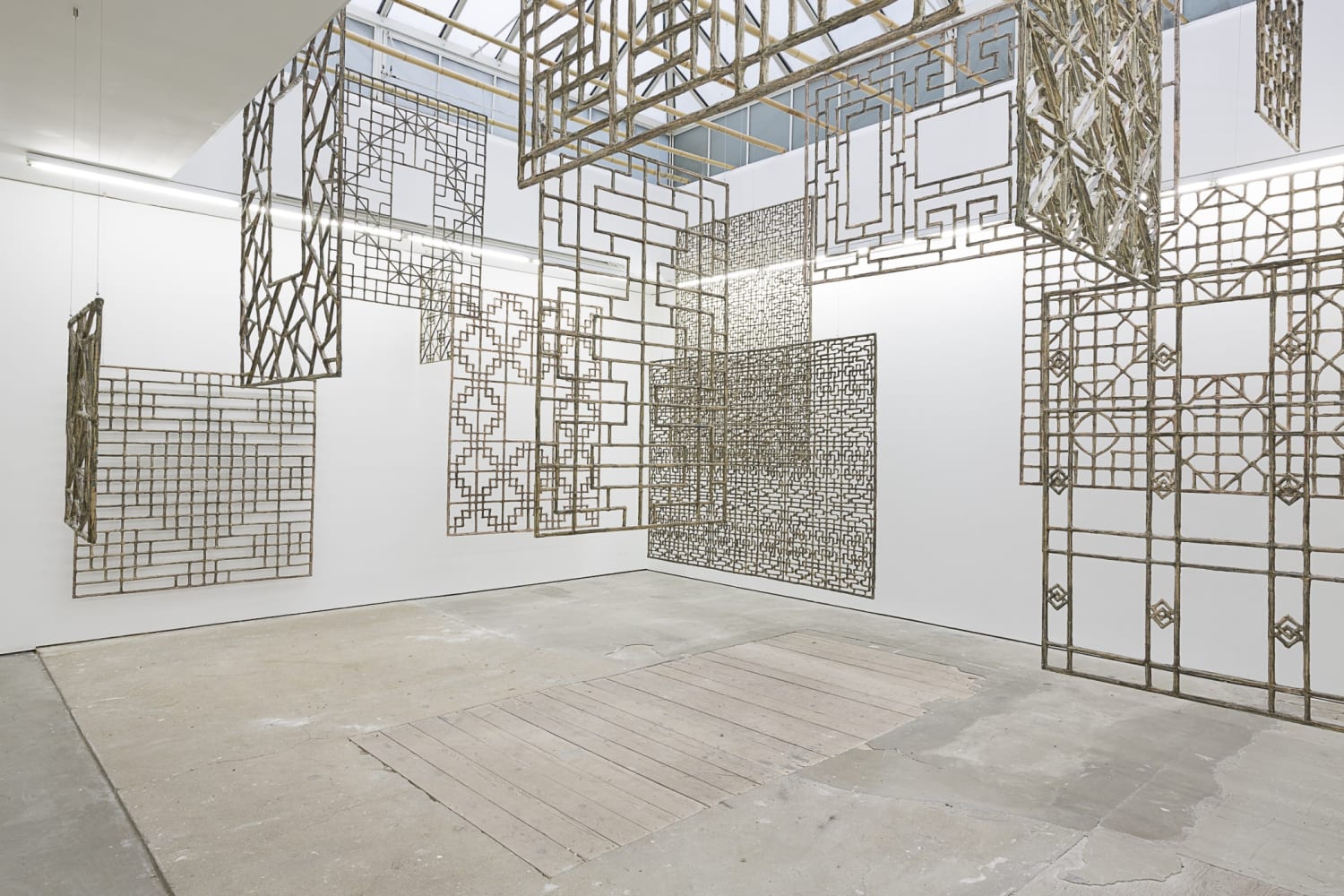 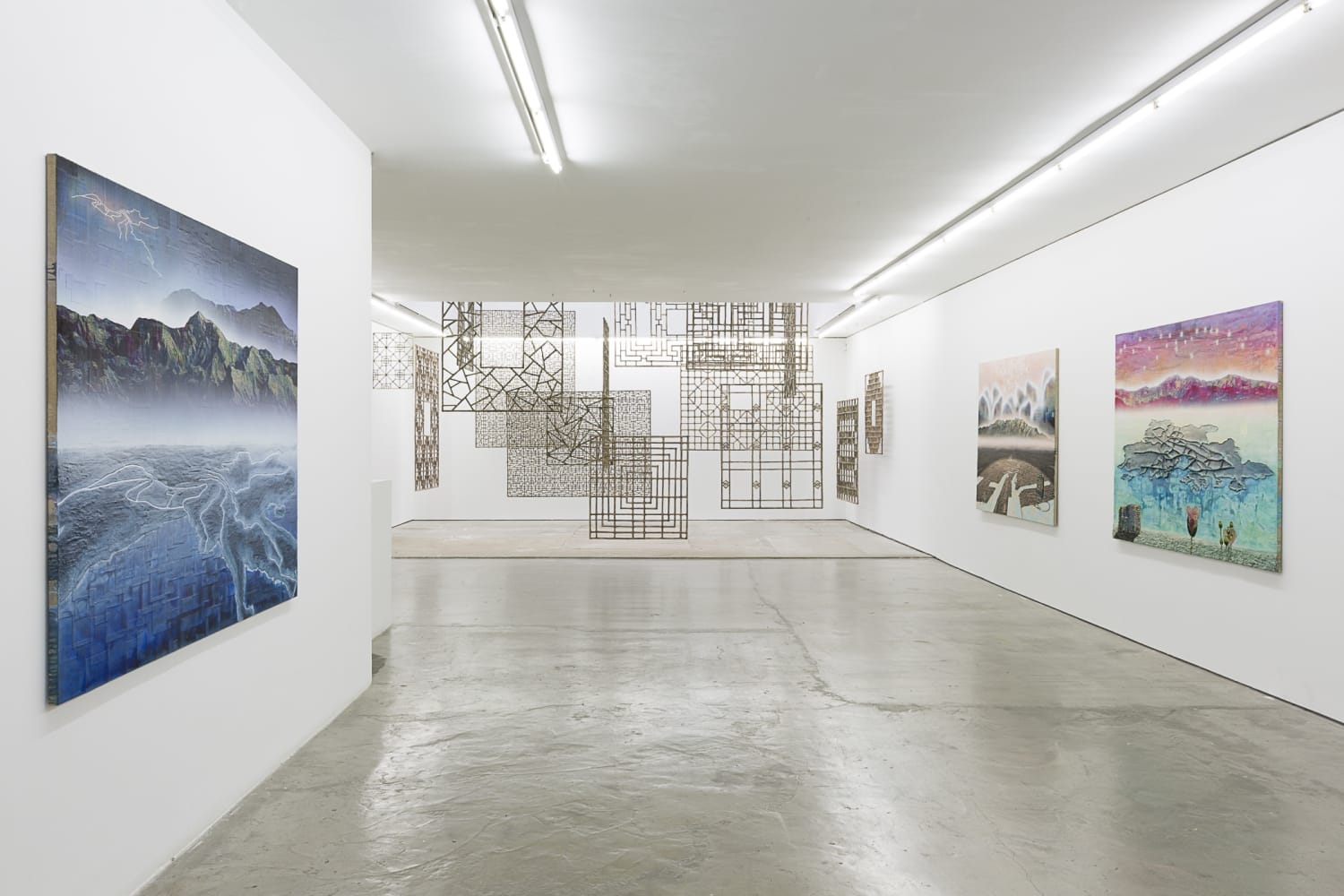 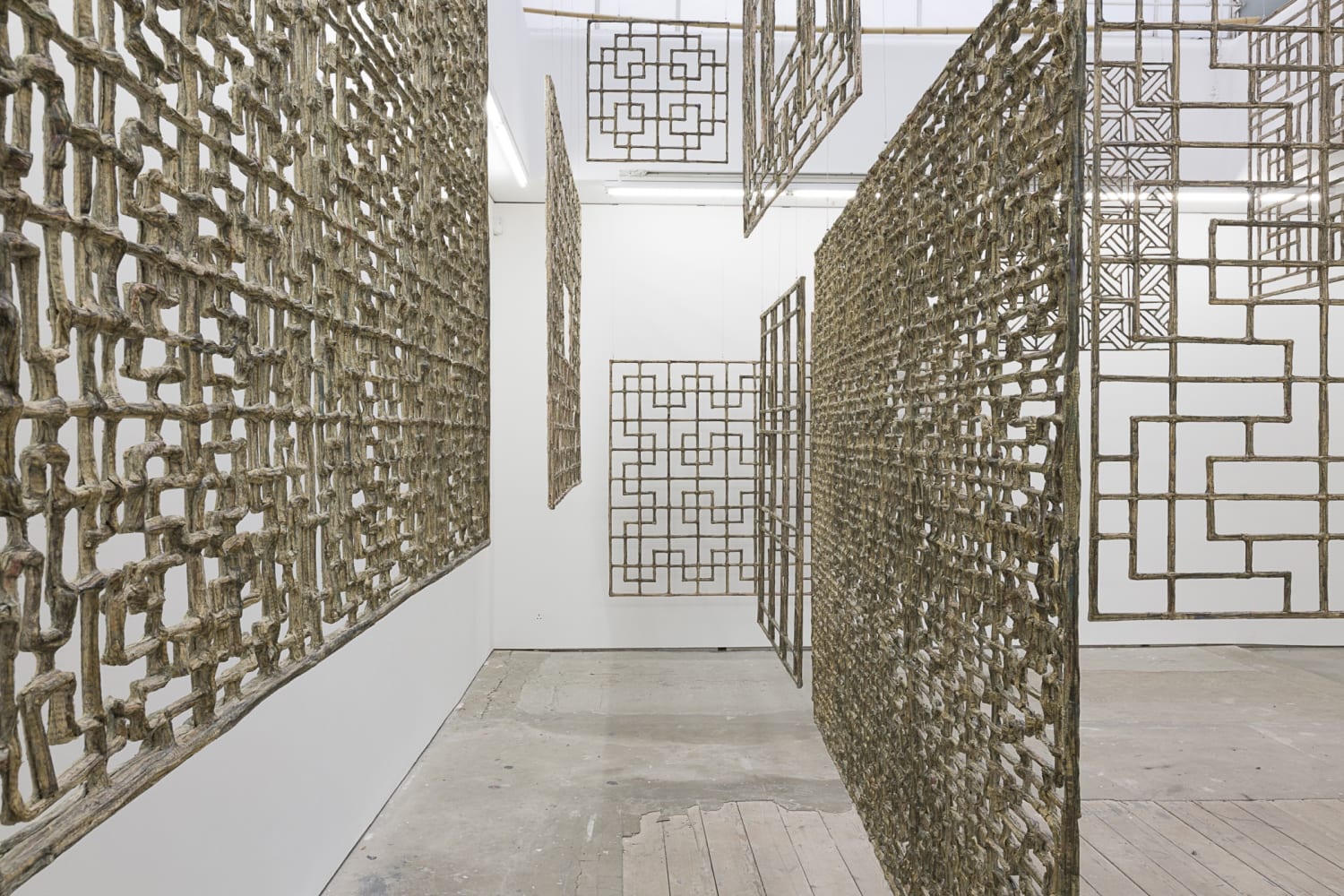 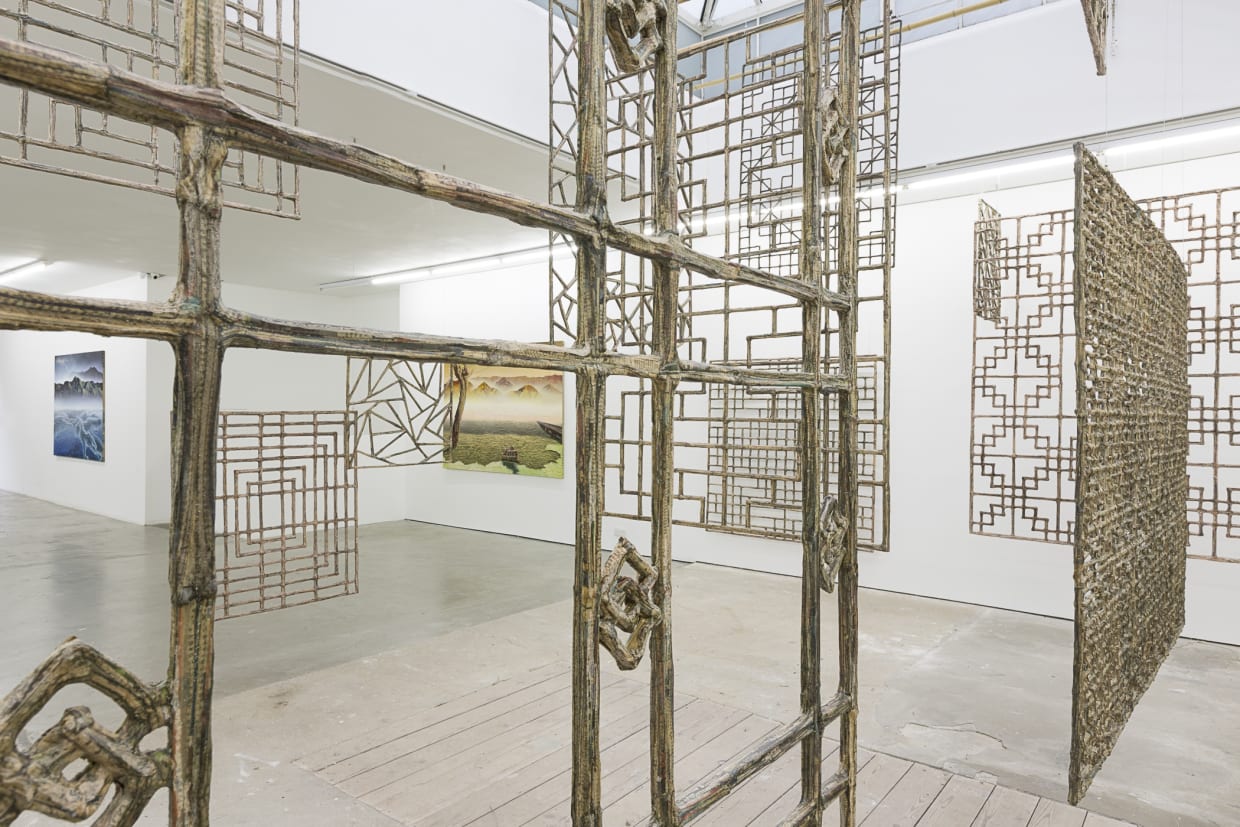 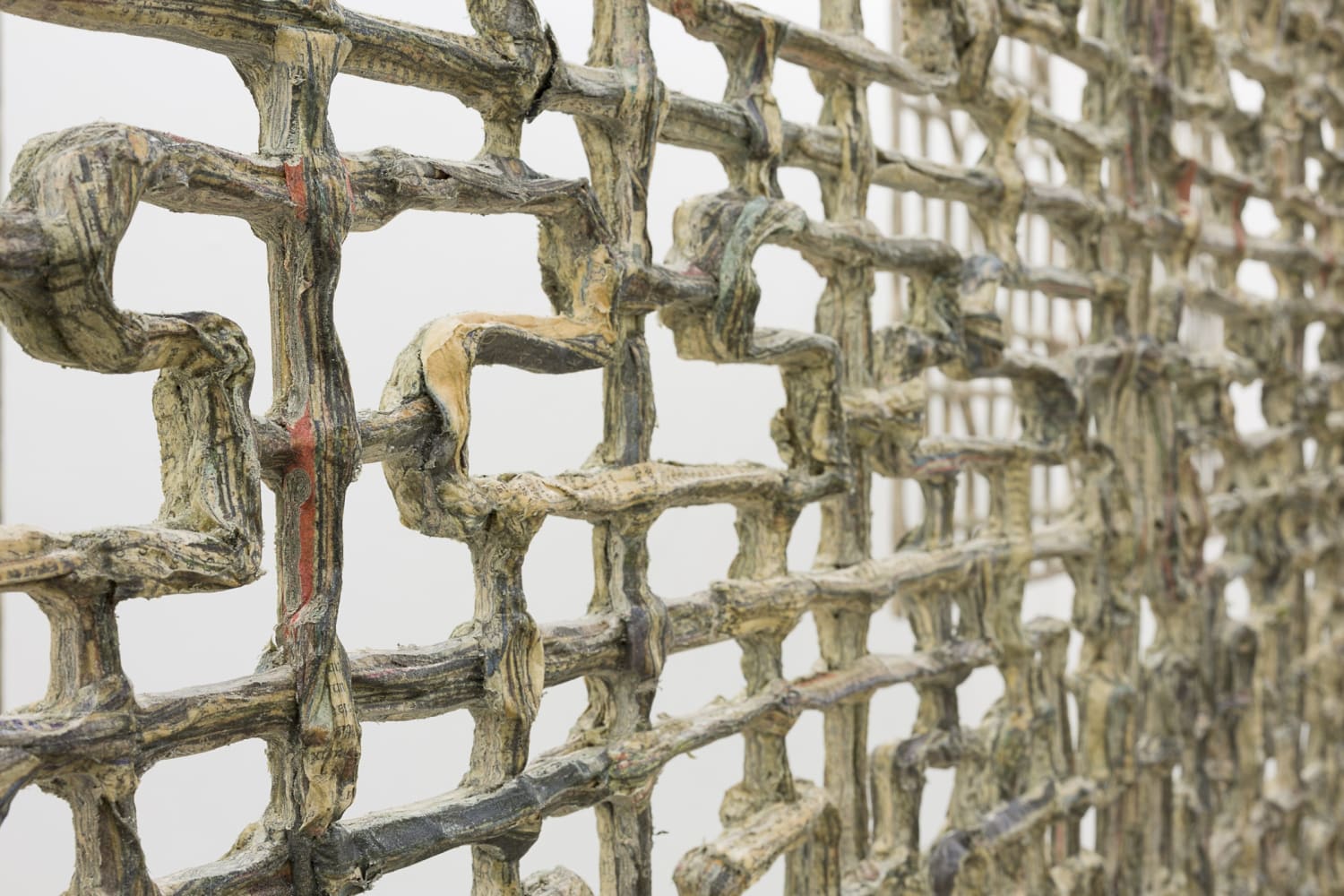 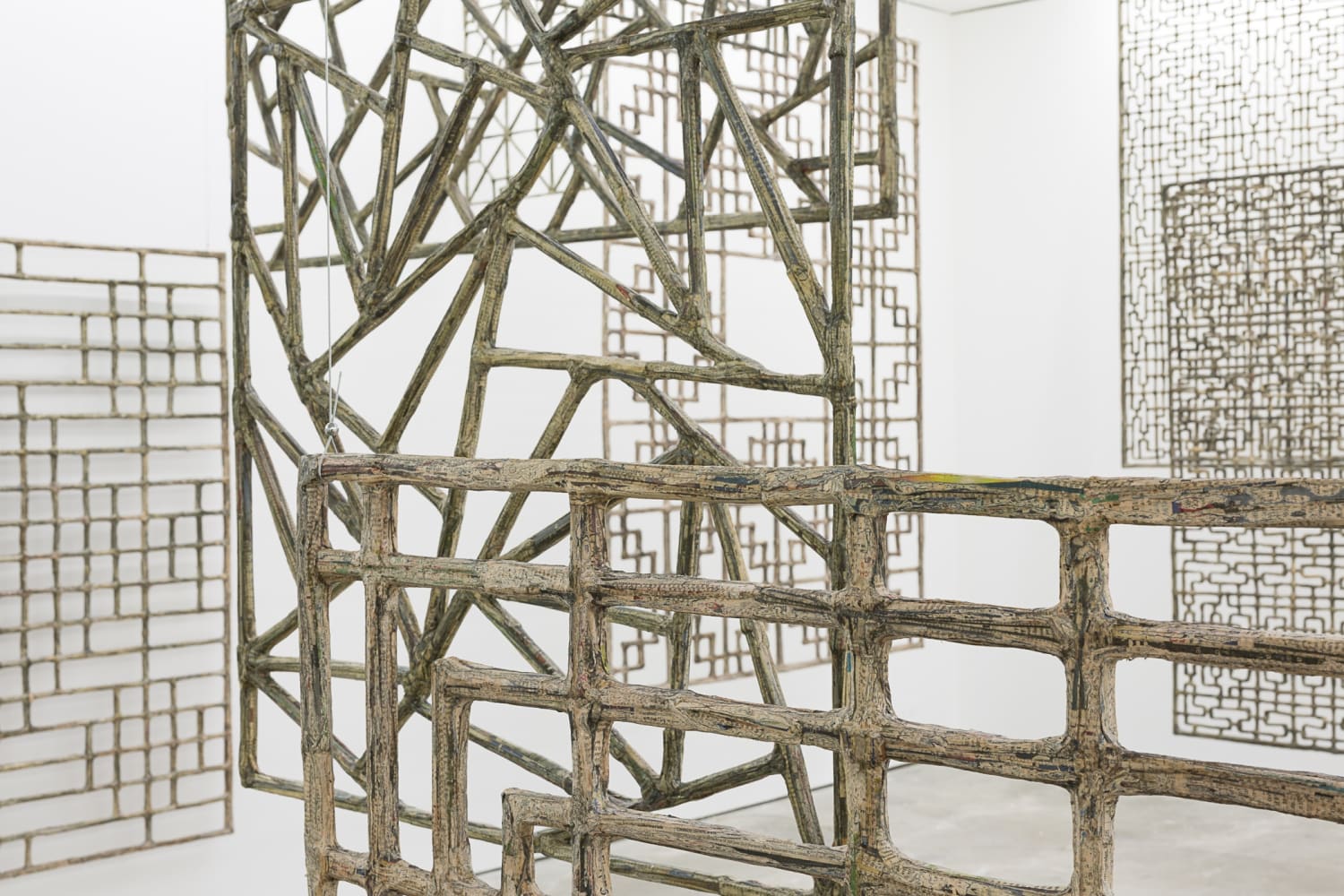 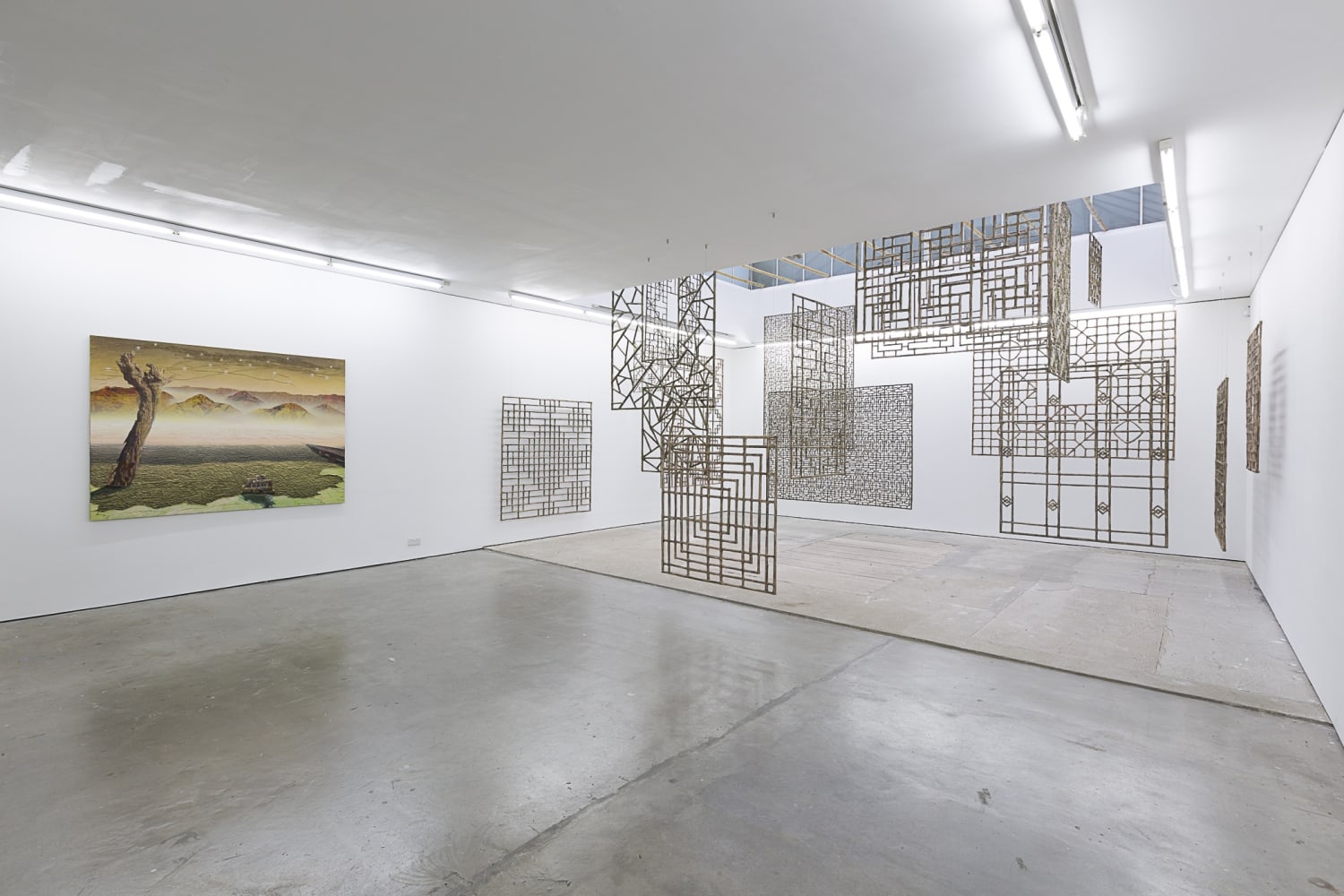 The paintings blend real and foreseen events to articulate the speed and complexity of social and environmental change in China, constantly weighing human costs. Suspended in the middle of the gallery, the monumental sculptural installation, entitled ‘Home’, is made from financial newspaper and bamboo. The window lattices refer to homes in China with traditional window designs that were demolished for rapid urbanisation. Their designs evoked varied aesthetic systems, echoing the cultural exchange that flourished in the era of the great Silk Road.

The Himalayan mountains, otherwise known as the ‘water towers of Asia’ and a sacred mountain hovers over the major river systems of the Tibetan Plateau. China having already built over 84,000 hydro electric dams is also constructing more throughout the Plateau to satisfy energy demands of a developing nation. Control over the rivers accumulates political leverage over all downstream nations. Beyond the human rights issues, widened to a geopolitical perspective, Tibet without an army will always be vulnerable to foreign control which means control over the water towers of Asia and a potential chokehold on China’s water and therefore it’s sovereignty.

In 2004, U.S. defense contractor Booz Allen Hamilton coined the term “String of Pearls” to describe China’s strategy in the waters stretching south of the Eurasian continent.

While the report, “Energy Futures in Asia,” is not publicly available, those with access have consistently cited one line: ‘China is building strategic relationships along the sea lanes from the Middle East to the South China Sea in ways that suggest defensive and offensive positioning to protect China’s energy interests, but also to serve broad security objectives.’ This description is followed by examples, which include the disputed islands in the South China Sea, as well as a series of strategically significant ports, such as Gwadar in Pakistan and Kyaukpyu in Myanmar and an ambitious canal project in Thailand that, if successful, would provide Chinese vessels an alternative to the Strait of Malacca. This allows China alternatives to sea lane choke points controlled by India and USA. China is surrounded by over 400 US military bases and after Hillary Clinton’s declaration of ‘America’s Pacific Century’ when she was Secretary of State, China responded with the construction of artificial islands in the South China Sea to effectively create stationary aircraft carriers used to claim disputed territory and to protect the maritime silk route.

In the painting the lines depicted like a star map are the ports China has invested into and also depicts an oil tanker route. On the bottom left is the ghost like gunboat of ‘Nemesis’ that was used by Britain to wage war on China to force consumption of Opium under semi-colonial rule that was exploited by other Western powers and Japan whom also invaded. The sacred mountain in the background hovers like an ominous wave.

‘Tears of Paradise’ refers to the milky teardrops of poppy opioids. Britain, the 1st narco state in history forced China under semi-colonial rule to consume opium sold by the East India trade company. It resulted in multiple invasions by Western powers and Japan, the ‘Unfair Treaties’ and the loss of Hong Kong. Within this historical framework, Communist China developed Capitalist policies that has resulted in economic miracles and the largest human project in history; The Belt and Road initiative or the revitalisation of the silk routes that connects more than 70 nations. The title plays on the word ‘tear’ to mean both crying and to rip.

The central ‘island’ area is the Pearl River Delta Economic Zone and Greater Bay area is a megalopolis of 9 cities: Guangzhou, Shenzhen (Silicon valley of China developed within 40 years - Where Huawei innovated 5G tech), Foshan, Zhuhai, Jiangmen, Zhongshan, Dongguan, four districts and counties of Huizhou and four districts and counties of Zhaoqing. Greater Bay is all these cities including Macau and Hong Kong connected by the longest sea crossing bridge in the world, 3000 km of highways, over 2200 km railways. Population of 22 million, the Pearl River Delta Economic Zone accounted for 19.9 percent of GDP and 38.9 percent of total trade in 2005.

The building on the bottom left contain’s the offices of the National Endowment of Democracy in Washington USA. The founder described the organisation as doing the work of the CIA 25 years ago. It is known as a regime change institution that funds Colour Revolutions around the world including the radical pro-Democracy/independence protests in Hong Kong while the US wages a trade war with China and enacts laws at the request of the protest leaders to inflict economic sanctions on HK if human rights in HK are not met by the standards of the USA. In other words the leaders have requested economic sanctions from a hostile foreign power over HK’s internal sovereign matters. The opium flower blooms under Hong Kong as a link to the recent history of colonial rule.

Desert of the Real

In Jean Baudrillard's Simulacra and Simulation: "If once we were able to view the Borges fable in which the cartographers of the Empire draw up a map so detailed that it ends up covering the territory exactly [...] this fable has now come full circle for us, and possesses nothing but the discrete charm of second-order simulacra. [...] It is the real, and not the map, whose vestiges subsist here and there, in the deserts which are no longer those of the Empire, but our own: The desert of the real itself..” Xinjiang is the largest administrative region of Northwestern part of China and will be the busiest intersection of the Belt and Road initiaitive (The re-ignition of the silk roads) as it borders 8 nations: Mongolia, Russia, Kazakhstan, Kyrgyzstan, Pakistan, Afghanistan, Pakistan and India (9 if you include disputed parts of Kashmir). It has 40% of China’s coal, 20% oil and gas and 20% potential Wind energy farms. The Uighur Muslims have attempted a separatist movement and briefly declared in 1949 independence, East Turkestan, with the support of Soviet Union. In 1990s the collapse of Soviet Union resurged separatist independence that was suppressed by Beijing. This was followed by terrorist attacks which was met with a severe crackdown and the current condition of one of the most high tech surveillance panopticons in China. Alongside algorithmic machine learning face recognition apparatus is also collection of DNA and fingerprints for a complete mapping of human movement whereby ’suspicious’ behaviour can be discerned and flagged for investigation.

The sky is a map of the high speed rail of China that in a matter of decades built more than the entire world. In 1945 Xinjiang was 82.7% Uyghur and 6.2% Han Chinese. As a result of the high speed rail network and policy in 2010 census Uyghur account for 45.84% and Han 40.48%. The Golden poplar tree has been used to hold back desertification officially dubbed the Green Great Wall, launched 1978 to continue until 2050. It aims to plant 88 million acres of protective forests, in a belt nearly 3,000 miles long

Beijing, Tianjin and Heibeiji are metropolises merging to form a Megalopolis called Jing Jin Ji of over 130 million people connected by high speed rail. At the base is the human scale of the holdout house, otherwise called a nail house, the last property to sell in a development, so-called due to the phrase ‘if a nail sticks up hammer it down’. Infamously nail houses went viral resulting in internet censorship for symbolising resistance. Within the context of this painting it becomes a meditative space to contemplate the existential relationship to civilisation. A deer in the left corner represents nature vs civilisation, Capitalism’s exploitation of nature and mythologically the messenger of Gods. The mid ground is the harnessing of the landscape for civilisation; the 3 metropolises merging into a megalopolis. Hovering over the megalopolis is 1 of the sacred mountains the Emperor would have traditionally visited to sanctify his divine right to rule over his subjects. Mythologies centralised onto nature’s monoliths help unify people to form civilisations. In the sky is the future map of the largest human project in history; the Belt and road initiative, the revitalisation of the silk roads connecting over 70 nations through investment to infrastructure.

"If These Walls Could Talk" Video screening, Karachi, Pakistan